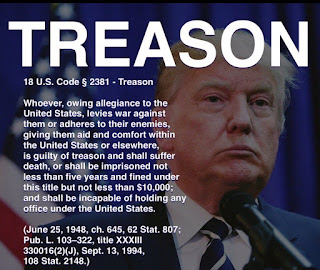 16 January 2021
This is normal after riots. Left intellectuals will blame right radicals, and political supporters of right extremists will blame Maoists. But one point is obvious that it is politically motivated. As a political scientist and jurist, one should correlate the past events and political announcements and then conclude accountability. Every action is fair in love and war, and war, direct or indirect, is the politics by other means. So Horowitz explained after studying many riots in India and other developing countries practicing democracy.
Riots in the United States confirm that corruption and riots can be minimized but cannot be eliminated in democracy. Politically motivated good governance is the only solution. Leaders represent people's ambition and culture of that time.
https://www.facebook.com/Vedicteacher/posts/3820216518057997
Politics summarized by Prof Dr. Chris Wilson of Indonesia
https://twitter.com/Chris___Wilson/status/1350206525248192513
14 January 20121 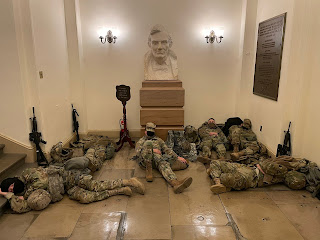 https://twitter.com/erinschaff/status/1349361672151040002/photo/1
"The US House of Representatives voted to impeach President Trump on one article of impeachment on Wednesday, charging the outgoing president with inciting the January 6 attack on the US Capitol building. The House vote makes Trump the first president in US history to be impeached twice. Trump released a statement following the historic vote but did not mention impeachment".
Video via @NBCNews
https://twitter.com/erinschaff/status/1349361672151040002
Twitter bans Trump
https://twitter.com/thehill/status/1348249503036485633
14 January 2021
https://twitter.com/i/events/1347651175236079616
Law must take its own course.
https://twitter.com/RSBNetwork/status/1349492790531645441
A man breaks a window as supporters of President Trump storm the U.S. Capitol on Jan. 6. (Leah Millis/Reuters
https://www.washingtonpost.com/technology/2021/01/13/facebook-role-in-capitol-protest/
12 January 2021
Suhas Palshikar writes in Indian Express on January 12, 2021.

"Why siege of Capitol in Washington DC resonates closer home, carries lessons for us all.

The US experience indicates that democracy requires continuous caution. But perhaps the least learned lesson at home in India is about the comparative pathology of such autarchy lurking in our midst".

"Trump relied on megalomania; Indira Gandhi, too, was carried away by her own image. But in the present moment, we have a combination of megalomania with systemic ingredients ensuring that democracy will not be defined by what ought to be in an Orwellian fashion but based on what is claimed as democracy. His vote share notwithstanding, Trump could muster only a handful and only for a few hours to claim that they constitute the people of the US. In India’s case, with much less vote share, a large section is willing to keep their faith in the new idea of democracy constituted by victimhood and dominance as entitlements of majority."
https://indianexpress.com/article/opinion/columns/us-capitol-trump-mob-siege-democracy-india-7142473/
10 January 2021
NDTV compares India with the US.
https://www.facebook.com/Vedicteacher/posts/3803644369715212
117th Congress certified Joe Biden as President of the United States. Biden shall be sworn on 20 January 2021.
Pippa Norris in Foreign Affairs January 7, 2021
"It Happened in America. Democratic Backsliding Should not have Come as a Surprise," Pippa Norris writes. https://www.facebook.com/Vedicteacher/posts/3797149300364719
"Elections are the heart of liberal democracy. Losers voluntarily leave office. Winners assume rightful power. Yet the world just witnessed the stunning sight of a mob storming the U.S. Capitol to reject the legitimacy of President-elect Joe Biden’s victory, driven by President Donald Trump’s delusional lies about a stolen contest. Rioters scaled scaffolding, broke through windows, and stormed the halls of Congress. They strolled through the Hall of Statues with a Confederate flag fluttering over their shoulders, brandished weapons on the floor of the Senate, and propped their feet up on Speaker of the House Nancy Pelosi’s desk. One woman was shot and killed. Members of Congress retreated into lockdown, gas masks in hand. They were forced to suspend the constitutionally required business of formally confirming the victory of the incoming president because of the incitement triggered by the incumbent president. This was an insurrection."
"Confirming President-elect Joe Biden's electoral win."
8 January 2021

January 7, 2021
"China’s Communist Youth League, echoing U.S. reactions to the 2019 pro-democracy protests in Hong Kong, called the storming of the Capitol a “beautiful sight.”
"The first imperative of any democracy is to physically secure and protect itself—its people, its public officials, and its institutions."
"For the last four years, Trump has been the arsonist in chief, lighting the populist flames of rumor and outrage. After a violent white supremacist rally in Charlottesville in 2017, he insisted that “wonderful people” were on both sides of the conflict. Later, he retweeted a threat of civil war if he were to be impeached".
https://www.foreignaffairs.com/articles/united-states/2021-01-07/capitol-siege-wake-call-america-shouldnt-have-needed?utm_medium=social&utm_campaign=tw_daily_soc&utm_source=twitter_posts
https://www.facebook.com/Vedicteacher/posts/3798700873542895
8 January 2021
World leaders condemn pro-Trump protesters overrunning US Capitol - ABC News (go.com)
(11) Facebook
Russia says the American system is ‘archaic’ & not up to ‘modern democratic standards’ after rioters raid Washington’s Capitol building — RT Russia & Former the Soviet Union.
7 January 2021
https://www.facebook.com/Vedicteacher/posts/3797149300364719
7 January 2021
"Democracies of the world are in trouble. Mobs want to disrupt law and order. Internet and social media are changing the world dramatically. Corruption in all societies affects the social system. Force of law is required to curtail the violence of lawbreakers around the world. The world should take a new shape. China, Russia, United States, G5, G7, G10, or G20 should call a meeting of the United Nations at the earliest. Elites around the world are instigating people of the opposition countries". Jaipal
https://twitter.com/i/events/1347027827426611200
Dan Rather explains that it is a coup and illegal violence. Congress must decide about the President. Who is to be blamed? (5:40) Who Inspired and incited the public? Who is fomenting the violence? https://www.youtube.com/watch?v=Cp1JTpuzwXA
See many reports of violence in Capitol Hill of US
https://www.facebook.com/Vedicteacher/posts/3795998697146446
31 August 2020
Belarus, Berlin, and Washington demonstrations pinpoint the future. Coming events cast their shadow before.
https://www.facebook.com/Vedicteacher/posts/3429955503750769
https://www.facebook.com/Vedicteacher/posts/3430073057072347
20200701(1 July 2020)
1. China interfering US Elections
China is "purchasing news outlets and entertainment companies to push its propaganda and erase any criticism against its government," he said. Chinese leaders are meddling in elections across the world, "restricting information about the coronavirus...”
https://twitter.com/chinfo/status/1276850698068557828
2. U.S. Presidents who betray America and its Flag by teaming up with foreign enemies to Steal Presidency Elections should be held to the Laws of Treason.
https://twitter.com/StandForHonesty/status/1275136443527106560
3. Environment
https://twitter.com/Forbes/status/1273958606648598531
4. Red China Spy
This is the face of hate. This is the face of bigotry. This is the face of racism. This is the face of inequality. This is the face of no Law & Order. This is the face of Anti-America. This is the face of the democrat party. Remember this face November 3rd & vote RED!
https://twitter.com/terryan11210907/status/1274752572545470471
20200630 (30 June 2020)
1. "Polls have consistently shown that Americans disapprove of his response to protests of police violence and believe that he has worsened race relations." Ashley Jardina: many white Americans who reluctantly voted for Trump stay home and watch the news more.
https://twitter.com/Chris___Wilson/status/1278140602417180674
2. "The same people who “broke” the Russia hoax story now expect us to believe their reporting on President Trump ignoring bounties on American troops?" Republican Senator
https://twitter.com/Jim_Jordan/status/1277661802395054080
20200629(29 June 2020)
President Trump "has been on the right side of history and the right side of American values,” Joseph Bosco writes. "The Trump team’s record on security and human rights vis-à-vis China to this point surpasses anything done in prior administrations.”
https://twitter.com/WhiteHouse/status/1277341676508516352
Trump campaign communications director says 12000 attended the Tulsa rally.
https://thehill.com/hilltv/rising/504353-trump-campaign-communications-director-says-12000-attended-tulsa-rally
Posted by Jaipal Datta at 15:11 No comments: