War and Peace Building in Colombia


War and Peace Building in Colombia 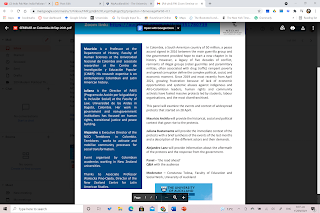 As some of you have visited Colombia with your students, have supervised PG thesis on this country, or are interested on Latin America, I am sending you this information, in case you have the time to attend, but also to request you to distribute it among your own contacts. The basic information is below, and full details are in the poster attached.

In late October we will be running a Seminar dedicated to Peru.

Thank you very much in advance, and warm regards, 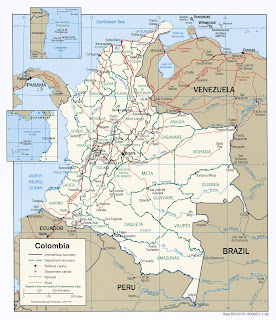 Is this the destiny of mankind? I do not agree. Human beings are intelligent bio-species. Young people shall find a solution to obtain peace in the challenging world. Political will is the need of the time. Venezuela is collapsing and young people want peace. They are looking at United States for help. Venezuelan has lost 11 Kg weight in few years. Ecological disaster is also affecting our lives.

Alexandra Guaqueta informs about "The Colombian Conflict: Political and Economic Dimensions". Ballentine and Sherman (2003) informs in their book "The Political Economy of Armed Conflict Beyond Greed and Grievance: A Project of the International Peace Academy." London: Lynne Rienner Publishers, INC that the International Drug Market, Transnational Crime, and the Growth of Illegal Armed Groups are quite prevalent in Colombia.

According to Ballentine and Sherman "The FARC and the ELN have became increasingly engaged in narcotics production and trafficking, extortion, and kidnapping. The paramilitaries have forayed vigorously into international drug trafficking, but have received local voluntary contributions" (p. 96). But FARC entered in to an agreement recently.

Can we think of peace without knowing the political atmosphere of neighboring countries. Corruption is prevalent.

Posted by Jaipal Datta at 23:16 No comments: